I’ve “always” wanted to have a very small notebook, to use it as a replacement for a PDA, but with more traditional keyboard and possibility to run normal applications. It was difficult, because until few months ago small notebooks were very expensive. The only affordable ones were 3 years old x-series ThinkPads, but it was hard to find a decent battery for it. But in 2007 Asus announced its plans to release cheap, small notebooks named Eee PC (Eee stands for Easy to learn, Easy to work, Easy to play). First version, with 7″ screen, used 900 MHz Celeron-M processor, which was not that well suited for this job, as it ate quite a lot of “juice” from battery. Year later, 9″ screen 900 series came to the public, 900 still having Celeron processor, and, later, 901, having the new Intel child – Atom. Atom was specifically designed for this purpose – ultra-mobile computers, with not so great performance, but with low energy consumption.

But Asus’ competition did not sleep. First HP, then other companies prepared their own cheap notebooks. HP MiniNote 2133 looked great, but included poor Via processor. MSI announced their UMPC to be released in July 2008, but had problems with their battery factory burning down, so they had to reschedule a bit – instead of the beginning, Wind was released in the end of that month, and only with 3-cell battery, 80GB HDD and Windows XP operating system, with other configuration options coming in august. Acer Aspire One, on the other hand, started with lo-fi version – 512 MB RAM (half of that installed in Wind), 8GB SSD “hard disk” and Linpus Linux. More manufacturers announced their plans to release such notebooks, including Dell.

I had to choose something. First criterion was availability. I live in Poland, and the problem is that distributors ignore our market. For instance, first versions of Eee PC are still not officially available here. Of course, I could take advantage of private importers, or even friends abroad, but I would do this only as a last resort. Last week, when I was still deliberating “what to buy”, I could choose from old Eee’s (701 etc), Eee PC 900, MSI Wind (official distributor, yay!), or ask friend to buy and send me Acer Aspire One. I’ve decided that I want large HDD, as I wanted to use Windows and 8GB is not enough, so Acer was not an option. Eee PC 900’s processor was energy-consuming, so I’ve decided to go for a notebook with Intel’s Atom, and 901 was unavailable even on Polish internet auctions. 901 had advantage of being smaller that Wind, but I’ve compared sizes on paper and Wind was only 2.5 cm wider, negligibly deeper, and a bit thinner, so size wasn’t a key feature in this comparison. Other thing was that I couldn’t wait too long – I have a moving planned soon, so it was possible that in a month I’d be without any spare money. And then, I went on and bought MSI Wind. I’ve ordered one from MSI’s official distributor, with doubled RAM (without any price increase, compared to the price Wind was being sold from other retailers).

MSI Wind is shipped in a brown box, which includes blue box containing notebook (or netbook, as some people call that kind of UMPCs), and a carrying case (leather from a plastic cow). 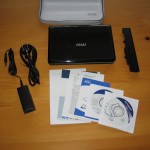 Inside the blue box there was the computer itself, battery, charger, two CDs (recovery and drivers), and a couple of leaflets (mostly covering guarantees). Charger and battery are protected by bubble bags, and Wind, having separate containter in the box, was wrapped in a normal plastic bag, but with an anti-scratch foil on its cover and a foam between a screen and a keyboard.

Overall, contents of the box is well-protected, and from the technical point of view, the box containts everything one may need, but I think MSI should work a bit more on the manuals part, especially the “Quick start guide”. Now it is only sockets and buttons description, without any hints for the begginers “what to do first”.

My first impression – “it’s so tiny!”. It is really impressive that it’s fully-featured PC computer. As an ultra-mobile device I think it shouldn’t be glossy on the cover, as it’s the first surface to take scratches, but when it become unappealing, I can always put a custom sticker on it (or maybe I’ll do it before it becomes ugly). 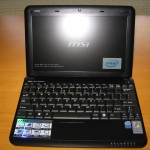 First patting on the keyboard – the buttons work nice, most keys are big, only some special characters being smaller. Touchpad could be bigger, and mouse buttons definitely should be divided – now it’s one bar with two microswitches beneath.

After power-on, Wind starts to configure pre-installed Microsoft Windows XP Home. It takes some time, so the manufacturer advice is not to rely on battery and use wall charger. WiFi is disabled by default, so during Windows’ configuration it couldn’t find an Internet connection (and I forgot to turn WiFi on). When installer has finished, Wind is fully ready to work, without any other actions neccessary.

The screen is incredibly sharp and vivid. I’m really happy that it’s perfectly matte, because I couldn’t stand working and cleaning a glossy one. 1024×600 resolution is enough for me – I still have to try developing/coding/sysadmining on it. Also, Wind has D-Sub output connector, so it’s possible to use an external display – it’s a great possibility, for example to watch DivX’s on plasma screens with D-Sub-DVI-HDMI connector, or beaming slides using projector.

I’ve written a bit of text on Wind, and I have to say that it is very comfortable. Only mistakes I made for the first few minutes were writing dot instead of comma, because those keys are significantly smaller than the others. I had also problems to get used to the position of “Fn” key (it’s in the corner of the keyboard, next to ctrl), as in my regular-size notebook I have ctrl in the corner, and Fn next to it.

Touchpad is OK for mobile purposes, but having a bit of free desk space, I recommend using some kind of external mouse – but it’s a general rule, not specific to Wind.

Wind’s equipment is generally what I’d need when being mobile. It could use a 3G modem, but for now, I couldn’t find any UMPC with one, so I’ve decided not to think about it – I can always buy a USB modem.

As I mentioned above, I wanted a HDD, not SSD, mainly because of the capacity. Also, SSD’s superb power efficiency, it appeared, is a myth, so only advantage of flash disks is a mechanical safety, as it contains no moving parts. Mechanical, because I had many problems with borked pendrives, and I don’t consider it very save way of keeping substantial data. 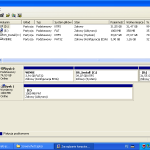 HDD in Wind is divided in 3 partitions (look left – it’s a Polish version of XP, but I think everyone can understand importand parts). First is Windows Recovery partition, second contains installed Windows, and third is initially free.

In the case of network connectivity, Wind has WiFi and Bluetooth wireless cards. It had no problems to detect and connect to networks at my home and workplace. Still I haven’t tested BT connection. It’s funny that not all UMPCs has BT – I’d consider it basic equipement for an ultra-mobile device without integrated 3G modem. 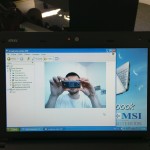 As almost all devices have a webcam, also Wind has it. And I have to say, for a web conferencing it’s quite nice. It has to be enabled by a keystroke, and after that, it’s accessible from “My computer”. When in use, orange LED near cam glows. I’ve bought a webcam some time ago, and after playing with it for a while, I hid it in a closet – I don’t have a use for it as I don’t do video conferencing, but if I had to – I have a possibility.

Wind has a built-in SD card reader, but for now I had no opportunity to test it, as my DSLR has CF and cell phone has M2. 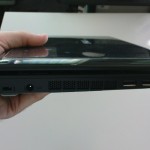 Wind’s design is quite sleek. It’s fitting great in a standard backpack, and it’s easy to grip it with one hand. According to manufacturer, it’s weight with 3-cell battery is barely over 1Kg (about 1200g – I don’t have any way to measure it myself), so I don’t feel it in my backpack at all. 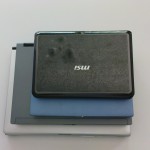 Battery is a difficult subject with any mobile device. For now I didn’t do any real-life tests, but Windows, with power-saving on and wireless connections off, tells me I have 2:35h of battery life left. With WiFi on – 2:29h. Of course it depends on processor load, because even without power-saving, Atom steps down to 800MHz (from a nominal 1.6 GHz) when more power is not needed. 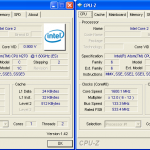 Lookat the screenshot to the right – it shows CPU frequency when idle (left) and when Firefox is starting (right).

But even when working in power-saving mode, when processor is locked to 800 MHz, system runs quite smoothly. I haven’t experienced any unpleasant waiting. I haven’t, though, run any very “heavy” software, like Eclipse, but I understand that Wind is not a workstation, so it would be stupid to criticise it for not being as efficient as one.

For now, I’m very happy with my new toy. Soon I will test it “in action”, because I’m going for my time off.

If I have something more to say after a month or so, I’ll post it here.