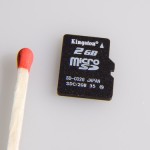 Windows XP on a netbook works fine with me, but as a person with Linux background it seemed natural to try some distribution on my Wind. As I wanted to try it first, I’ve decided to user some live distribution first. I don’t have an external CD device, but on a previous occasion I’ve managed to cope with bootable USB drives, so it was a natural (and only) choice. I was just about to re-format pendrive I’ve used to boot Linux from, but then I remembered that I have couple of loose 2GB microSD cards I’ve bought just because they were cheap, and an USB card reader. Idea of having an operating system on a so tiny memory card was very appealing!

I’ve plugged in my SD card and started looking for some distribution. On some web page I had seen that there is some Ubuntu edition prepared especially for netbooks, so I decided to go with this one. It is called “Ubuntu Netbook Remix“. Some time ago to make a bootable USB drive you had to struggle with tons of command-line utilities, but now there is a Windows utility to do all the work: prepare a device: create boot record and then copy data – it is called Image Writer for Windows. So, lets get to work.

First, you have to download files: Ubuntu Netbook Remix disk image (about 1GB) and Image Writer for Windows. Then, plug in your desired USB flash device and run Image Writer. Choose click on “…” button, choose downloaded Ubuntu image, select drive letter of your desired device (be careful as this device is gonna be totally overwritten), and click “Write”.

And that’s it! From now on, you can boot operating system from this device as long as computer’s BIOS supports that. 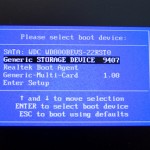 As for MSI Wind, during bootup, you can press F11 to enter booting device choosing menu. Then you can select your USB device – some devices show as an empty line, but you can still choose it. In this menu you can see also mult-card-reader – and yes, this means that you can just plug SD card into your reader and boot operating system using built-in reader!